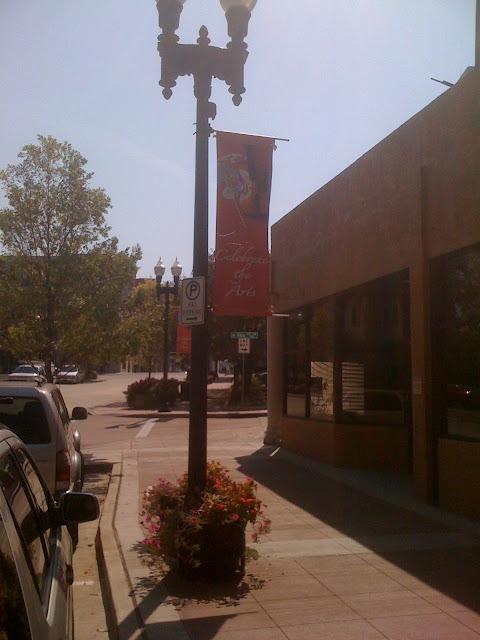 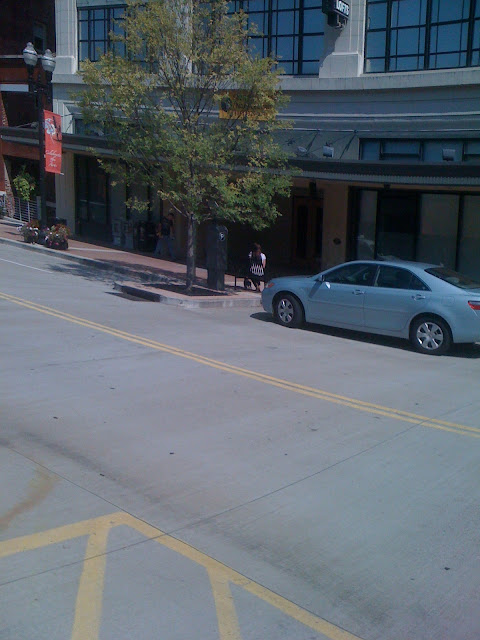 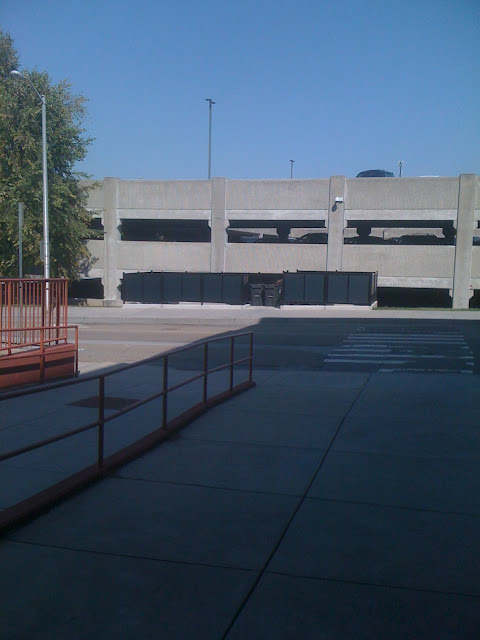 (www.holaknoxville.org)  which will be held on Depot Street again this year and also First Friday on October 5, 2012. I look forward to seeing all of you there.
Thanks for your interest in the 100 Block of S. Gay Street and in Downtown Knoxville.
Posted by Rick Emmett at 10:40 AM 20 comments:

New Multimeters on the 100 Block of S. Gay Street

I hope all is well with everyone and we thank you for your continued support and interest in the 100 Block of S. Gay Street. It has been a long while since I have posted anything on this blog since others have taken up the mantle here. The 100 Block Association has done a good job of disseminating information both on Facebook and Twitter and also using other forms of communication. I thought it might be good, however, to post this information concerning one item left over from the 100 Block construction and that is the installation of the new Multimeters. (See picture below) 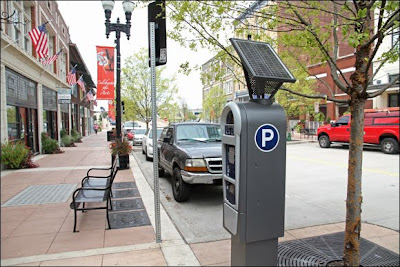 Ideally, these would have been installed immediately at the end of construction since they were to be purchased to replace the much older meters there that had been experiencing maintenance issues for a while. These two meters are now replacing as many as 27 of the 15-year-old meters. Since we were delayed in the purchase for a variety of reasons, the technology has improved but so did the cost. When we made that decision (2008), the cost of new single meters including installation, etc.was around $1000 each so it was very cost effective to go with this newer technology. While this is new to Knoxville, many of our sister cities have been using this technology for years. It reduces street clutter and gives more options as far as pricing, payment, and messaging, and cuts down on maintenance costs. There has been some confusion, I think, about the hours of operation and pricing. We plan to charge $1 an hour with a two hour maximum. This decision was a result of much discussion in the last few years with business and property owners, including the 100 Block Association, expressing concern with parking availability for customers on the block. The thought was that the most convenient short term parking should have a higher rate and a time limit and we have operated on that premise in our decision making. We continue to hear that same thought from others downtown as well but we have made the 100 Block our ideal street area for these types of innovations. We have been asked about nights and weekends and that policy has been mainly in effect for the garages with certain metered spaces being subject to enforcement. For instance, at the request of the 100 Block Association we have designated two meters on the Gay Street Viaduct as 15 minute only with no free designation. The signage on the multimeters will let motorists know when they must pay to use the meters and we will continue to monitor their enforcement especially all along Gay Street. These parking spaces are not available for the Residential Parking permit process and were not previously signed for that purpose prior to construction. Other spaces on both the Gay Street Viaduct and in the O.P. Jenkins area parking lot are signed for that use. I would encourage downtown residents to check out that program for reduced parking rates. Also the City has the Jackson Avenue Parking Lot very close to the 100 Block which is also $1 an hour and $40 for a monthly pass. Incidentally the multimeter there is almost identical to the new ones we just installed. We are currently working on flyers to use on the 100 Block to let folks know of the change in parking. Enforcement will begin on October 1, 2012. Thanks for your interest in Downtown Knoxville
Posted by Rick Emmett at 12:27 PM 4 comments:

Please mark your calender tomorrow, October 11, for the annual meeting at the Emporium at 6:00 pm.
New officers will be selected and future initiatives for the Association will be discussed.
I will be there along with other folks from the City to update folks on the Block as to recent developments.
I hope to see you there.
Posted by Rick Emmett at 12:11 PM 2 comments:

Thanks to Southern Constructors for their work on the project and for providing me with these pictures. 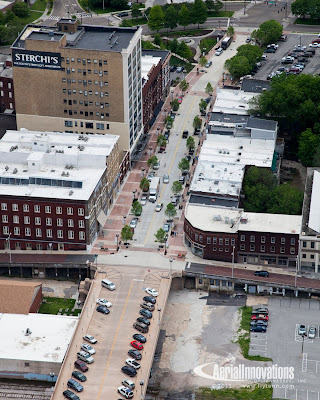 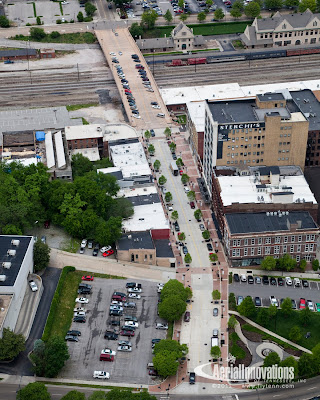 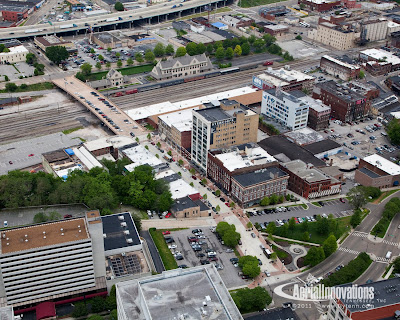 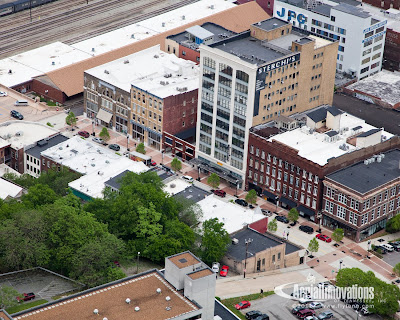 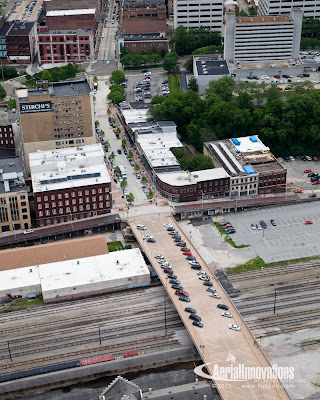 In the next few weeks we will be working on the remaining punchlist items. Thanks for your interest in the 100 Block of S. Gay Street.

I just wanted to give you a quick update on some parking issues for the 100 Block of S. Gay Street.

This week we plan to lower the price for parking on the Jackson Avenue Parking lot to bring this cost in line with the meters on Gay Street. The new cost will be .50 an hour or $4 for the entire day. Monthly parking rates will remain at $40.

Also we are in the process of placing a Commercial Loading Zone sign on the western side of the 200 Block where it is presently designated "No Parking". We are mindful here of the central garbage location we have agreed to for the block. At some point, KAT may need this space for a Trolley stop but we wanted to put these spaces back in service. In addition to loading and unloading these spaces will be available for free after 6 and on weekends as are other commercial loading spaces.

Lastly, we continue to work on getting the two parking kiosks for the 100 Block. I have scheduled a meeting today to get a status report.

Thanks for your interest and don't forget First Friday this week. Also the Mardi Growl parade and event (http://www.cityofknoxville.org/Press_Releases/Content/2011/0211.asp) will be Saturday starting at our new Downtown Dog Park and ending at Market Square.
Posted by Rick Emmett at 5:33 AM 1 comment:

Hello to everyone. I hope this year has been kind so far.

I have just a little news I thought some of you would want to know about. The 100 Block Association has now formed and I would encourage those on the 100 Block to get involved there.
Since I have now taken over the Downtown Coordinator duties, I am attending their meetings and I know your representatives there are doing some good work.

One area I heard a lot about while our construction was going on was short term parking. I am pleased to announce that we now have installed two 15 minute parking meters in the Gay Street Viaduct (see picture below) which will be enforced 24/7 including weekends. This is a switch as all parking after 6:00pm and on weekends had been free.

If this accomplishes our goals here, the thought is that we may add a few other meters around town. I have also discussed maybe having a spot or two on the Cradle of Country Music Park area parking lot. 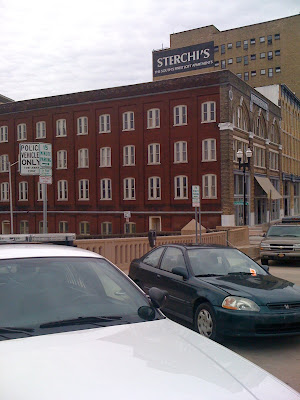 I have also been in discussion about making the current "no parking" area on the 200 Block of S. Gay Street a Commercial Loading area. That way it would be available for parking after 6:00pm and on weekends until such time at the KAT Trolley needs that space. After attending the KAT meetings, it appears to me to be in the fall before that occurs. Of course we have also agreed to create a central space for garbage collection in this part of the 200 Block so we will need to clearly mark off that area.

Some other changes we are discussing, and I believe will happen soon, is to reduce the parking fee on the Jackson Avenue lot. I will post more on this when it happens.

The kiosks planned for the 100 Block are still being discussed and I will continue to pursue that and will let you all know when that happens. The units we hope to order are basically identical to the one installed on the Jackson Avenue parking lot.

I have been in contact with the Service Department and KPD about the dog waste situation and new signs and barrels for the waste have been installed. Everyone of the block needs to take responsibility for their pets, obviously, to help us all keep this area one of the premier spots in the City.

Below is a picture I took of the Block from the Viaduct. 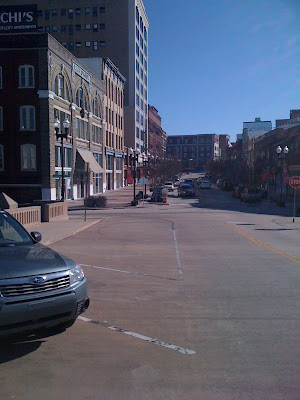 As always, thanks for your interest.

Tour de Lights has been rescheduled

Tour de Lights has been rescheduled to Tuesday, December 21 at 7 p.m. due to inclement weather.The location and other details have not changed.
For more information on this year's Tour de Lights go to, http://www.knoxtrans.org/tourdelights/index.htm.
Please help us spread the word!
We’ll be passing through the 100 Block twice. You can help win the Most Welcoming Neighborhood award by being outside when the group goes by (perhaps singing carols) or decorating your balcony/building. Riders should be coming through the 100 Block the first time between 7:10 and 7:20 p.m., and the second time between 8 and 8:20 p.m. (these are very much rough estimates!)
Last year there were more than 450 bicyclists, and we expect to have many more this year. For more info, call the Bicycle Program at 215-3815 or email kelley.segars@knoxtrans.org
Posted by Rick Emmett at 12:19 PM 4 comments: